What Did We Learn: Juicero 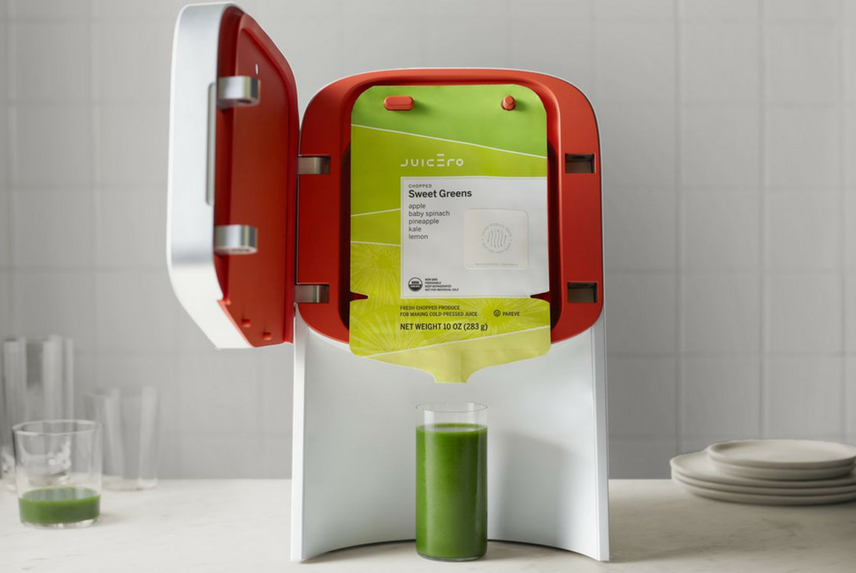 Misfires are tough for companies to endure, but they can also provide excellent lessons for others. What Did We Learn is an ongoing feature series focusing on insights gleaned from unsuccessful companies and products.
Juicero was the toast of Silicon Valley investors. Until it wasn’t.
Before its spectacular public relations belly-flop, the juice-pressing machine startup raised north of $134 million from top venture firms. This year, it collapsed under the weight of an unsustainable business model and widespread ridicule in the press, shutting down operations just 16 months after launching.
The company sold pouches of cut-up fruits and vegetables on a mail-order subscription basis to accompany its $699 Wi-Fi enabled juice-presser. These proprietary pouches fit inside the Juicero, and with the push of a button, produced a glass of fresh juice. That is, until it was discovered by Bloomberg that the pouches could be squeezed by hand, producing essentially the same result as the machine itself.
Once word spread that people who bought the Juicero had shelled out nearly $700 for a device that was not actually needed to deliver the juice, sales cratered quickly, ultimately prompting the company to drop the price by $200, then offer full refunds to customers.
Brutal mockery in the press was just one facet of why Juicero failed and follow-on investment dried up. The company was hemorrhaging $4 million per month after its initial infusion of venture capital, with the board determining the business model of shipping refrigerated pouches to customers was too expensive to sustain.
Don’t Over-Promise
As the first version of the Juicero was hitting the streets, founder and healthy living enthusiast Doug Evans launched a media blitz touting the benefits of the Juicero. He spoke glowingly of the device’s innovative nature, at one point comparing the machine to the launch of the Tesla Roadster. Evans’ hubristic overstatement of the machine’s capabilities set the stage for an even bigger fall from grace once it was discovered that the device was all but superfluous.
Niche Markets Can’t Be the Primary Customer
At $699, with juice pouches costing between $4-$10 a pop, the Juicero’s initial target market was primarily the well-heeled Silicon Valley set who wouldn’t blink at spending so much on a juice machine and pouches with which to fill it. While the company eventually planned to pivot to attract a broader base of customers with future cheaper iterations, it never got the chance before the bottom fell out. This doomed the juicer’s early sales to the small number of people who could afford it, costing it precious early momentum.
Underestimating the Cost of Doing Business
Right from the get-go, Juicero was losing money on its machine. Each press cost the company $750 to produce, even before factoring in operational expenses, according to Bloomberg. This meant, in spite of its lofty $699 selling price, the company lost money with each and every unit shipped.
Furthermore, Juicero’s board determined that the cost of shipping refrigerated juice pouches to customers was unsustainable long term. This hobbled the company’s finances, and made it a losing proposition right out of the gate, resulting in the company being desperate for additional capital infusions to keep the doors open.
As investors fled, the company was forced to lay off employees and cut costs, but it still wasn’t enough to stave off failure.
Functionality Should be a Cornerstone
Juicero may have been banking on its subscription-based model to generate most of its profits long term, which could conceivably have been sustainable if the juice press itself wasn’t overpriced for the function it actually performed. If the machine cost $200 from the outset, it would have cast a much wider net for potential customers, who may not have minded as much that they could simply squeeze the pouches themselves.
Pricing the machine so high when all it really did was mechanically squeeze the pouches was a byproduct of bloated manufacturing and design costs. If customers are going to spend big bucks on a product, it had better surpass what a person can do with their bare hands.
Juicero will likely go down in Silicon Valley history as a case study example of how not to launch a product. Its meteoric rise and precipitous fall demonstrates just how quickly things can go awry when a product doesn’t live up to its hype, even with big financial backers and a founder who genuinely believes in what they’re selling.