There are many reasons why a project might stray from its original plan, but a leading factor is often underestimating complexity at the project’s outset. And that mistake is costing companies.

McKinsey recently analyzed 1,800 completed software projects and 1,600 integrated-circuit design projects for a deeper understanding of the state of product development.

The study found that only 30% of software projects met their original delivery deadline, while the average overrun was around 25%.

With hardware projects, the problem was worse: More than 80% of projects were late and the average overrun was nearly 30%.

Overruns such as these cost companies greatly, with both a direct impact on budget and an indirect effect on market position and perspective. This is a tough problem to tackle, especially when teams are building increasingly complex products at a faster rate than ever before.

Focus on the Definition Stage

Multiple handoffs, interactions and iterations take place throughout the development process. Yet, because of antiquated and disparate tooling, teams are often disconnected and lack visibility into what other groups are doing or how those actions affect scope.

The result is often tradeoffs without market context. This can lead to scope creep and quality issues entering the process downstream, all due to poor communication in earlier development stages.

To smooth handoffs and create a refined process, you need to focus upstream at the definition phase of development. If you get that right, you can mitigate issues downstream so they don’t become much larger and more significant problems.

Use the Right Tools for the Job

Products are more complex than ever, so it follows that development of those products has grown more complicated. Still, many companies continue to use the same, unstructured tools they’ve always used in their development process.

Today’s highly structured, highly governed work requires technology that can not only withstand the changing landscape but also ease the transition and manage complexity at scale.

Modern product development platforms like Jama Connect empower your teams and support the workflow you need to compete in today’s market.

Managing complexity at scale means defining relationships among requirements and items through to defects, as well as validating and verifying that what you’re building is what the market needs.

This is exactly what Jama Connect™ provides. Seamless integrations with best-in-breed tools like Jira Software increase the visibility of activities across a unified environment.

You can operate with the confidence that your teams are working collaboratively; your review process supports your structure, and you can deliver on time – all with live traceability along the way.

Teams often underestimate complexity because they believe that issues they’ve encountered in the past won’t come up again. Avoiding past mistakes requires leveraging what you’ve already done and benchmarking for the future. A structured approach backed by consistent data lets you see how projects are progressing in real time.

Requirements will change and grow over the course of any software project. This is a natural aspect of software development. In fact, if a project doesn’t experience some requirements evolution, the team likely is ignoring reality and risks releasing an irrelevant product. The prudent project manager anticipates and plans to accommodate some requirements growth.

Scope creep (also known as feature creep, requirements creep, featuritis, and creeping featurism), however, refers to the uncontrolled growth of functionality that the team attempts to stuff into an already-full project box. It doesn’t all fit. The continuing churn and expansion of the requirements, coupled with inadequate prioritization, makes it difficult to deliver the most important functionality on schedule. This demand for ever-increasing functionality leads to delays, quality problems, and misdirected energy.

Scope creep is one of the most pervasive challenges of software development. The techniques I described in the first two articles in this series (adapted from my book More about Software Requirements) provide several ways to define a project’s scope. In this final article in this series, I’ll give you some suggestions about how to manage the insidious scope creep.

The first step in controlling scope creep is to document a clearly stated and agreed upon scope for the project. Without a scope definition, how can you even tell if you’re experiencing scope creep? Project teams following an agile development life cycle should write a brief scope statement for each iteration. This helps make sure that everyone understands the goal of the iteration and what functionality the team will—and won’t—implement during that iteration.

An ill-defined scope boundary can have serious consequences. In one situation I know of, a customer had hired a package-solution vendor to migrate three sets of existing data into the new package. Partway through the project, the customer concluded that six additional data conversions were required. The customer felt that this additional work fell within the agreed-upon scope, but the vendor maintained that it was out of scope and demanded additional payment. This scope ambiguity, and the resulting conflict, was one factor that led to the project being cancelled and a lawsuit being filed. Not the desired outcome.

The second step for managing scope creep is for the business analyst or project manager to ask “Is this in scope?” whenever someone proposes some additional product capability. This could be a new or extended use case, a set of functional requirements, another user story, or a new feature or report. Note that the project scope could also encompass activities and deliverables besides the software products themselves. Perhaps your customers suddenly decide they want an online tutorial to help users learn the new system. This doesn’t change the software deliverables, but it certainly expands the scope of the overall project.

Sometimes, though, the requested functionality lies outside the scope as it’s currently defined, but it’s such a good idea that the management sponsor should expand the project scope to accommodate it. Less frequently, a proposed change could even modify the strategic product vision in some fundamental way. The question to consider is whether the proposal to expand the scope of the current release will significantly enhance the success of that release.

Electing to increase project scope is a business decision. When weighing whether to increase project scope, the key stakeholders need to consider cost, risk, schedule, and market or business implications. This demands negotiation between the project manager, management sponsor, and other key stakeholders to determine how best to handle the scope alteration. Referring to my three-level model of business, user, and functional requirements, the stakeholders must decide whether proposed changes in user or functional requirements will become the project manager’s responsibility through a scope expansion (Figure 1).

Following are some possible strategies for accommodating a scope increase:

Increasing the project’s scope—or, even more profoundly, the product vision—always has a price. The people who are paying for the project must make a considered decision as to which scope management strategy is most appropriate in each situation. The objective is always to deliver the maximum customer value as soon as possible, while achieving the defined business objectives and success criteria, within the existing constraints.

There’s no point in pretending the project team can implement an ever-increasing quantity of functionality without paying a price. In addition, it’s always prudent to anticipate a certain amount of scope growth over the course of the project. A savvy project manager will incorporate contingency buffers into project plans so the team can accommodate some scope growth without demolishing its schedule commitments. This isn’t simply padding or a fudge factor. Thoughtful contingency buffers are simply a sensible way to deal with the reality that things change and projects grow.

Don’t be victimized by the specter of creeping scope or attempt in vain to suppress change. Instead, establish a clear scope definition early in the project and use a practical change control process to cope with the inevitable—and often beneficial—requirements evolution.

Learn how product development teams can leverage analytics to improve efficiency and quality in “The Essential Guide to Software Development Team Metrics.” 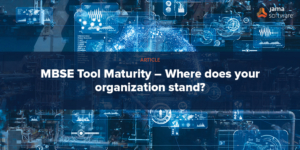 MBSE Tool Maturity – Where does your organization stand?