“At the beginning of the automotive age, drivers entering a city were required to have a person on foot walk in front of the car sounding a klaxon to warn the citizenry that a motorized vehicle was approaching. Will regulators require something similar now that we know our machines can fail to protect us from all danger?”
New Details About Fatal Tesla Crash Emerge
Steve Hanley, gas2.org

“Our kids will grow up in an environment where they’ll look back and say, ‘They actually let you drive?’ Eventually they’ll work out the kinks; they’ll have to, with the aging population and any number of other concerns.”
John Blyler, SEMI Pacific NW Forum Discussion (below)

The tragic autonomous driving accident in June has raised awareness and broadened interest in the topic of smarter, safer automotive electronics systems.

In this light, we’re posting a transcript of our attendees’ discussion, divided into three parts with one post each week. Read part one, below. 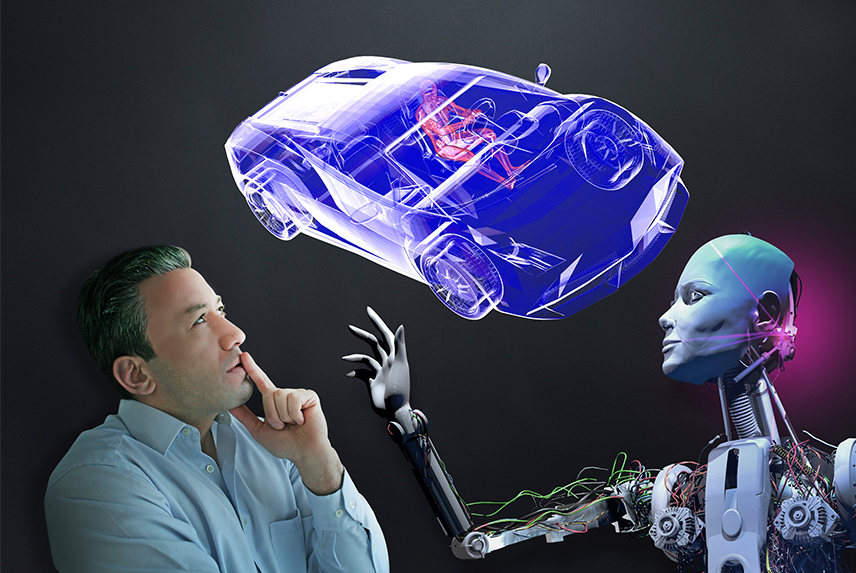 Bill Chown: There were a lot of reference to the changes being brought about by autonomous vehicles. What does it mean to take what was an independent system and put that into the context of the infrastructure and environment around it, all the other vehicles around it and all the other things going on, and turn that from an individual system into a system of systems challenge?

Derwyn Harris: Yeah. The acknowledgement of being driven is the first real instance where humans are relinquishing some level of control to robots, or at least knowingly. We fly with robots oftentimes, and the military’s been doing it for a long time, but cars will be the first time that it’s widespread commercially. And so I think that recognition and that reality of how we’re going to overcome that was an interesting insight.

John Blyler: When I think of robots, I tend to think of—especially in electronics— artificial intelligence and algorithms and what-not. But a lot of the industry is maybe making microprocessors or networks and disparate systems or what we put together in embedded systems; this is going to add yet another layer or another more interesting emphasis. Was that the takeaway?

Derwyn Harris: It’s so much about perspective, right? You think of the number of deaths on the road today, and the degree to which—and I’ve always felt this way—the United States has a very lax system for training and educating drivers and putting safe drivers on the road, and yet, we don’t question that. And all of a sudden, when robots are in charge, we suddenly start to question and fear the consequences, when the reality is you can demonstrate the safety that it would bring.

Bill Chown: Is this well-controlled robot with lots of rules better than some average…

Bill Chown: A teenager, who just came up from watching everyone else and thought, “This is fine. I can do this.”

John Blyler: Well, that was one of the comments that I heard at another show: Our kids will grow up in an environment where they’ll look back and say, “They actually let you drive?” You know, because eventually they’ll work out the kinks. I mean, they’ll have to, with the aging population and any number of other concerns.

Bill Chown: Yeah. That was one of the commentaries about the evolution of the Apple or Google car. And someone describing this was saying, “I’m confident that my 12-year-old will not need a driver’s license.”

Bill Chown: So, an indication of expectation of a rapid rate of change in the automotive space. Long design cycles, conservative ways of thinking about what’s going to change and what’s not going to change, and now a huge difference in the industry. The companies that used to be are no longer the driving forces. They quoted 34 automotive start-ups in California.

Bill Chown: Not just Tesla. And some of those are very, very specialist, and it’s more niche, but focusing onto all of the pieces that go into this revolution in automotive.

Derwyn Harris: And trying to predict that revolution, right? And the sociological aspect of it. Is it going to be a personal expression of who we are, like cars are today, or will it become a pure means of transportation where we no longer associate a car as an expression? Which changes the way it’s marketed and the way it’s sold and the way it’s purchased, and there’s such an impact to the market, both from the industry building them, but also the consumers consuming them.

John Blyler: So we have an industry that’s been very mechanical, and has become more and more electrical over the last decade or two. On top of that, suddenly they’re going to have to consider other multi-discipline system issues. That’s quite a task for anyone, and there are tools that are coming along to help, but one would expect certain lags throughout the process.

Bill Chown: Well, it’s making the industry change its thinking significantly. And they’re realizing that they don’t have the skill set and resources, and that’s probably reflective of why there are lots of startups in California. A different set of skills is being applied to this industry. It’s not, anymore, “How do I bend the metal?” or “How do I make an internal combustion engine work effectively?” It’s all about, “How does this thing communicate?”

Derwyn Harris: I’m curious, ’cause one thing that came out in the session was the lack of influence the IoT has had, or the lack of implementation of IoT around automotive. But at some point, IoT will be important and necessary. Is there a time when that comes about or are we just not there yet?

Bill Chown: I think it’s still not there yet.

Bill Chown: There’s going to be more and more of those pieces that must play together. Right now, the automobile is a carrier for communications systems and loads and loads of sensors. But those sensors—right now, they’re part of the car. Could they be a thing that I just add on as I need those features?

That could turn the industry into a supplier of a lot of component parts; that would be interesting. Because right now it’s being driven by the manufacturer that says, “I want my car to have all these features, and you design them for me.”

But I think, over time, it’s going to evolve to a point of, “I can buy that off the shelf. I don’t need you to design that for me anymore.” You know, rear view camera. Every car has to have a rear view camera from next year’s models onward towards Odysseus. And every single one of them right now is crafted for that car. But they could be a very off-the-shelf, standard IoT…

Bill Chown: …that plops in and does stuff. And if it’s an IoT, it doesn’t just belong to that car anymore; it belongs to the infrastructure around it. So now, the infrastructure could take advantage of the camera in every car to see what’s going on, on the roadway, as opposed to every car having to have its own knowledge. Can the system gain something from those sort of things? I think we haven’t got there yet. I haven’t got to the realization of the value of the ubiquitous IoT to a bigger picture, and it’s typically being applied to a niche role every single time I see an IoT. It’s specialist for something.

Derwyn Harris: Yeah. I feel like the homes we live in are the first proving ground. Until they can solve it for the home, it’s going to be hard to solve it in…

Bill Chown: So I’m going to have an automated refrigerator but can I reuse the tech in my car? Well, I suppose I can have a refrigerator in my fancy car, but that’s really not the point. But what does that thing do? Can I have whatever that thing does that’s applied to a refrigerator more universally applied in a broader case, and could I reuse that? I think reuse is going to be critical if we’re going to keep on growing some of this stuff at the rate we’re growing things. If we can’t reuse what we did before, it becomes unscalably expensive to keep on doing custom stuff.

Look at the silicone industry; when I started in silicon 30-odd years ago, we’d see 30 or 40 thousand design starts a year of custom silicone, and it’s way down on that now, because we’ve come up with reusable technologies that mean we don’t have to go and build a special way every single time.

But I haven’t seen that in the assembled system. We build around one of those things. They’ve all got the same xylene set PGA in them, and yet every single one of the gadgets is different. So I think we’re going to see some reuse at the end application that we aren’t seeing yet.

John Blyler: One example might be the use of Ethernet, which is pretty common in other IoT apps. Let’s not talk wireless so much, but there’s a push now in automotive systems, to have that be one of the buses.

Bill Chown: Right. And so, there’s a newer IoT, there’s a new automotive standard for Ethernet that starts to take away some of the limitations and risks there’d be for that and put that in a more deterministic piece.

Bill Chown: That was one of the conversation points. That’s going to be the standard interface for all of these additional things. There’s still going to be standards for the critical path of running the antilock braking, but for all these other things we’re adding on—the sensors, the communication, the external visibility, all of the infotainment that that’s going to bring into the cabin of the car—if the car doesn’t have to be a vehicle for the driver to know what they’re doing. I think those are going to be all Ethernet.

As companies continue to incorporate autonomous and other innovative technologies into system designs, adding reliable validation, verification and traceability analysis during development becomes critical. This is just part of what Jama’s robust requirements management platform does to help teams build smarter and safer complex systems. Sign up for a free, 30-day Jama trial.