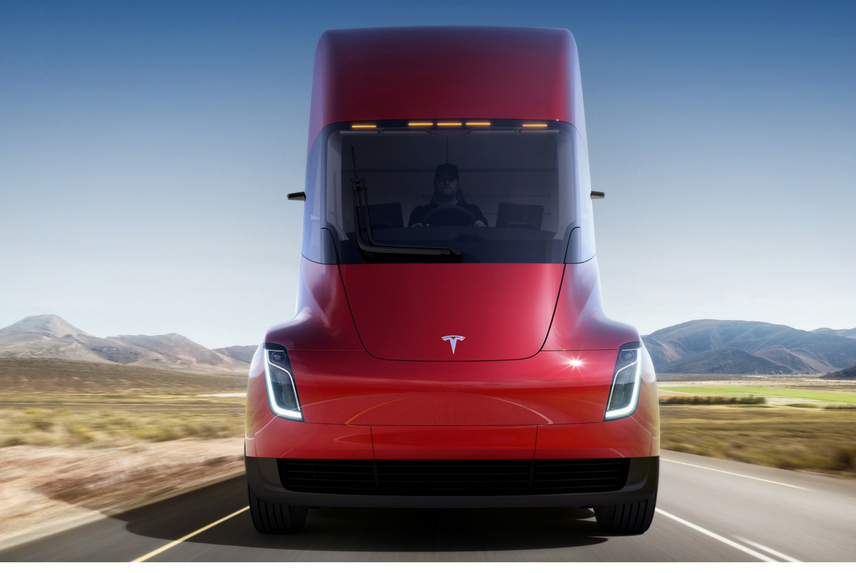 It seems like every day companies make news by unveiling the latest in autonomous driving technology. Here are some recent updates as the world of self-driving vehicles keeps cruising…

With great fanfare, Tesla pulled back the curtain on its long-anticipated electric semi-truck in November, igniting questions about the future of the trucking industry.

Tesla CEO Elon Musk was on hand at the flashy unveiling of the Tesla Semi in Hawthorne, California, which promises 500 miles of range on a single charge, semi-autonomous enhanced autopilot included as a standard feature, and an eye-popping five-second 0-60 mph speed.

The hulking behemoth features a futuristic, streamlined look both inside and out, with the interior more resembling a minimalist jet cockpit than a standard truck cab. The interior is clad with screens that show the truck from various angles through the use of exterior mirror-mounted cameras, which Tesla says are used in support of its autonomous driving capabilities.

Tesla has not shied away from introducing technologies that disrupt long-established industries, and its electric semi truck follows that trend. The smaller, 300-mile range version of the Semi will cost $150,000, while its larger, 500-mile capacity Semi will set you back $180,000.

The unveiling raises inevitable questions about whether autonomous or semi-autonomous trucks will up-end the freight industry, with many wondering what effect it will have on human truckers’ jobs.

GM and Cruise are gearing up to launch their self-driving car service in dense urban centers as soon as 2019, according to GM President Dan Ammann on a recent investor call.

Cruise has been evolving its self-driving technology since 2013. In that time, the San Francisco-based company has quickly become a vanguard in the automotive space. Its 2016 partnership with GM has so far resulted in three generations of test cars that promise to yield the autonomous ride-hailing service of the future.

San Francisco and New York have been the main test markets so far, and Cruise CEO Kyle Vogt said during the investor presentation that it’s aggressively preparing for an initial launch in the Bay Area as its first major commercial market.

Cruise says it will focus on large urban centers first, rather than smaller markets. It’s approaching rolling out the technology with an eye toward scalability, noting that it’s capable of launching in multiple cities simultaneously.

Velodyne Announces Its Most Powerful LIDAR Yet

Leading manufacturer of laser sensors for autonomous vehicles, Velodyne, recently announced the VLS-128, which the company says will have twice the range and three times the resolution of its previous version. Anand Gopalan, Velodyne’s CTO, says it was designed to pave the way to fully autonomous Level 5 functionality.

Achieving true Level 5 has long been the goal of self-driving technology makers, as it represents true autonomy — able to match or exceed the performance of human drivers under any circumstances.

LIDAR is at the heart of most self-driving cars. It’s a sophisticated laser sensor that provides a 360-degree view around the vehicle, enabling the self-driving system to see potential road hazards and decide how to react.

The high resolution and range offered by the VLS-128 enables autonomous vehicles to make critical decisions faster and with greater accuracy than its predecessors, which is critical for safe driving at high speeds.

Velodyne’s newly unveiled LIDAR packs all of that power into a smaller package, and represents a big leap forward toward truly autonomous driving.

Driving yourself around requires your full attention and monopolizes your vision, but what will you do to keep occupied when relaxing in a car that drives itself?

Intel envisions a future where passengers of driverless cars have access to a wide range of entertainment options to while away the hours spent as a passive passenger. In-cabin movies, games in the car and even immersive VR and AR experiences are just some of Intel’s plans, it recently announced at the 2017 LA Auto Show.

The chipmaker says it is partnering with Warner Bros. to develop entertainment options, some of which sound pretty darn cool — like an Augmented Reality experience that turns the car into the Batmobile and the outside world into the streets of Gotham City.

No word yet on when Intel plans to roll out these features, but it will certainly be something to watch, and sounds like an exciting addition to the autonomous vehicle passenger experience.

The Colorado capital has been testing the EZ10 driverless shuttle on designated test roads, and hopes it will be ferrying commuters to their offices as soon as next spring.

The shuttle, manufactured by French developer EasyMile in partnership with Panasonic, the Colorado Department of Transportation and the Regional Transportation District (RTD), was demoed just this week at the RTD station before excited and supportive local and state officials. Colorado Gov. John Hickenlooper even designated the test day, Dec. 4, as “Connected and Autonomous Vehicle Day”.

The hope is that shuttles like the six-passenger EZ10 will one day serve as a “last mile” option for commuters, bringing workers the final stretch between public transit stations and their paces of work. The shuttle is driverless, contains no steering wheel or seatbelts, and uses cameras and LIDAR systems.

There was even a bit of unexpected drama during Monday’s test run, as the shuttle suddenly stopped during the one-fifth of a mile test. In a truly Western twist, a tumbleweed rolled into the path of the shuttle, causing its sensors to apply the brakes.

Panasonic’s executive vice president of strategic innovations, Jarrett Wendt, told The Denver Post that there is a lot of work to do before the shuttle is ready to be deployed for passenger use, but says the stakeholders are resolute to bring it to fruition.

Further testing is planned for a two-mile stretch of road near Panasonic Denver, and it could begin testing on the highway next year.